I'd bought some ferrite rings at the rally last Sunday so decided to have a go at making a transformer for use with a HF vertical antenna.
Wound 9 turns on the ring with a tap at 3 turns for the coax. The wire goes to the other end of the coil. Connected about 7 metres of wire, taped to a 7 metre fishing pole. This had a low SWR at about 28 MHz, and also around 7 MHz (why 7 MHz?). 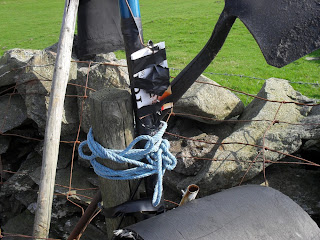 Went to Kirkby Moor (SOTA G/LD-049) this afternoon and tried it out. On 28 MHz I talked to G6MZX (Thornton In Craven), G6LKB (Ulverston) and G4TUZ (Lancaster). G4BLH and G1KLZ couldn't hear me so it might not have been working very well, I'd expected them to be stronger on that band. 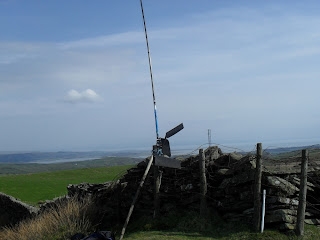 Worked G6LKB and G6CRV (Heysham) on 18 MHz, both were strong signals.
Transmitted some WSPR using the recording stored on my phone, on 7 and 18 and 50 MHz. There was only one report on 7 MHz but on 18 MHz there were a few from the USA. On 50 MHz, I got -28 and -24dB reports from G3ZOD in Stockport, which was about the same as I get from home. As Kirkby Moor is a much better site, the antenna was probably not working that well on 50 MHz either.
Made another 2 QSOs on 145 MHz with other summits (Gummers Howe and Lambrigg Fell) before packing up.

On the way home I parked above Marton and did a test to compare my new vertical with the Watson Multi Ranger 200 on the car. Sent some WSPR on 18 MHz (using the fishing pole) and the reports weren't much different to what other UK stations were getting into the USA.
On 7 MHz I transmitted once from the Watson and then from the fishing pole, 4 minutes later. 2 stations received me both times and there was only 1dB or less difference between the two. A 1.2 metre long mobile antenna isn't going to be very efficient compared to a full size dipole but it was good to know that the home made vertical (which shouldn't work on 7 MHz anyway) worked about as well.
To check the 28 MHz performance against the Watson, I listened to someone in the Liverpool area on 27.800 MHz (CB channel UK21). With the Watson they were S4 but with the fishing pole they were
Posted by M1AVV at 19:17