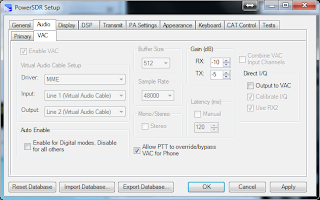 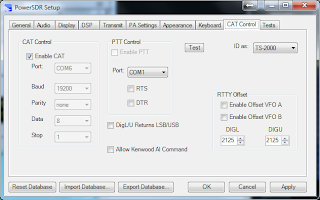 PowerSDR setup for audio and CAT. COM6 is a virtual serial port.

TX audio is set to -5dB as this is the level which gives just under 100% output power on SSB when fed through a virtual audio cable from WSPR. I got an email from someone telling me my WSPR signal was spreading all over the (200Hz wide) band, so trying to be careful to avoid any distortion. I think the distortion might have been to do with getting 20ms breaks in the audio though, sometimes the receive audio was getting clicks and whatever was holding up the USB interface would have been doing it on transmit too. Re-installing the Flex1500 driver sorted that out. To WSPR, these clicks made all the received signals look like they were spreading over a wider bandwidth.
The RX audio might not need to be so low but anything higher usually puts data software into the red on waterfall type displays.

Had a problem with the radio recently where the transmit power was next to nothing (it just about moved the needle on my power meter). I thought the PA might have gone (the software was showing 100% output power and a normal looking spectrum) but when I installed an older version of PowerSDR (version 2.0.19 instead of 2.2), it went back to normal.
Posted by M1AVV at 17:46