I took some photos of the antennas at home last weekend while the weather was nice.

Where the HF wire comes down to the back yard. The wire is tied on to the clothes line hook with some rope and then hangs down to the ground. There is about 10 metres of wire in all, making a half wave on 14 MHz. 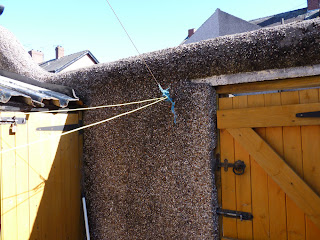 The Solarcon A-99 with the transformer for the wire below it. The pole is 8ft 2" diameter steel. 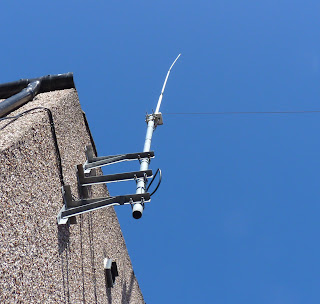 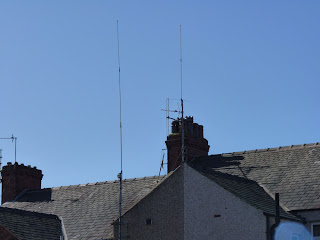 View from the top of my street, looking south. In the background is the south end of Walney Island and Piel Island (on the left). The mast is at the United Utilities depot in Barrow, with antennas for their 139 MHz system on it, as well as some mobile phone networks. 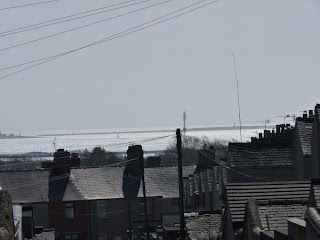 Tried wPrime on a Samsung N130 netbook (on its battery) and the 32M test took 137.4 seconds in Windows XP. That was about the same as I got when trying another laptop which had a 1.4 GHz Pentium M processor (which have been around since 2003).
Posted by M1AVV at 20:03 No comments:

I've just ordered an LDG Z-11ProII auto tuner. I was wondering whether to get the Z-817 instead but you can fit an internal battery to the Z-11 so the Z-11 is better because it can handle more power.
My other tuners are an LDG AT-7000 which only works with my Icom IC-7000 and a Zetagi M27 CB matcher (it works above 20 MHz).
Below is a view inside the M27: 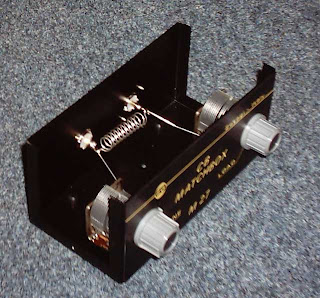 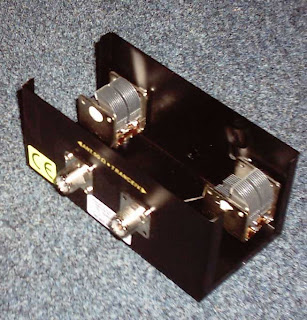 I've also got a Zetagi B150 CB amplifier, had it for many years but not used it for a while. It never worked well on SSB, the original circuit is actually running in Class C (there's a DC short between base and emitter of the MRF455 power transistor, through a ferrite bead inductor, in parallel with a 10 ohm resistor). Mine now has some bias current because the ferrite bead has been removed and the bottom of the switching relay coil has been connected to the base of the MRF455. This gives some bias current only when transmitting.
Circuit diagram for the B150
Why build an amp with an AM/SSB switch (changes the delay on tx/rx changeover) if it won't work on SSB? The B300 uses a totally different circuit, still using MRF455s but in a pair.
Posted by M1AVV at 19:00 No comments: