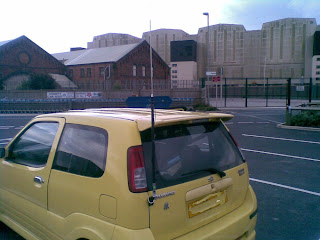 Watson Multi Ranger 200 on the car. I've not tried this at over 30mph but probably won't be driving very far with a HF mobile antenna on. 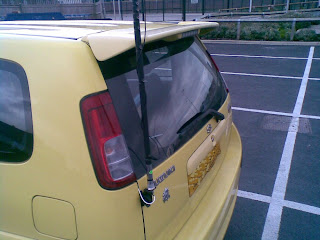 RG8-Mini (or RG-8X) is the 50 ohm coax size which is somewhere between RG58 and RG213, 7mm diameter. You might use it where you need flexible coax but where RG58 isn't good enough. But is it really any better than RG58?
It seems to be sold more as a high power HF cable than for use where low loss matters, and I first saw it being used on CB. There were red and grey versions of this cable.
A few years ago I made up a cable of black RG8-Mini, about 11 metres long with PL259 plugs on and sometimes used it for portable operation. I thought it would probably be better than RG58 so wasn't too worried about the loss. But this week when I was on Muncaster Fell I had a listen around 433 MHz and didn't hear very much. I could hear more on my handheld's own antenna than on the 2m/70cm mobile whip that I had set up on a pole.
When I got home I measured the loss of this 11m of RG8-Mini on 2m and 70cm. With a very short piece of RG58 I was measuring 9 watts on 70cm. Replacing that with my coax cable reduced that to 2 watts! That's about 6.5dB loss or 0.6dB per metre. RG58 is supposed to be better than that on 70cm. At 144 MHz, the loss was about 2dB which is more like RG58 should be.
The official figures for RG-8X are better than this but it doesn't seem as much of a standard as RG58 or RG213. I think I bought mine at a rally and I had some on a 2m/70cm dual bander at home before I put decent coax on it so that might have been the same piece of cable.
Posted by M1AVV at 21:58 No comments:

There's some activity on 70 MHz WSPR now, on 70.0286 MHz. I can receive G0MJI from Liverpool, using my Icom IC-7000 and the dual band 2m/70cm colinear on my chimney. On the proper 70 MHz dipole in the loft, there is no improvement in S/N because there is more noise indoors. I've nothing to transmit on 70 MHz SSB though.
Alex G7RNX in Dalton was also on 70 MHz WSPR on Sunday and could be received by G0MJI and G3ZOD (Stockport).

Made a PC to radio interface for an FT-847 before finding out it wouldn't work properly because...
On the Yaesu FT-847 there are separate connectors on the back for FM and SSB data modes. The 6-pin mini DIN socket can only be used to transmit on FM (there seems to be receive audio on SSB through it though). On SSB, transmit and receive audio are through a 3-pole minijack socket. The tip of this jack is for transmit audio and PTT (ground through a resistor to transmit).
The 6-pin socket can be used for the PTT on both FM and SSB.
Connecting a cable directly between the headphone socket on a PC and the FT-847's SSB data socket made the radio stay on transmit. There needs to be a capacitor to block any DC current path which might key it up.
It seems a bit of a strange thing to have 2 data sockets but when the FT-847 was designed, people weren't using a PC sound card for data modes so would have had a standalone packet TNC.
Posted by M1AVV at 23:03 1 comment: