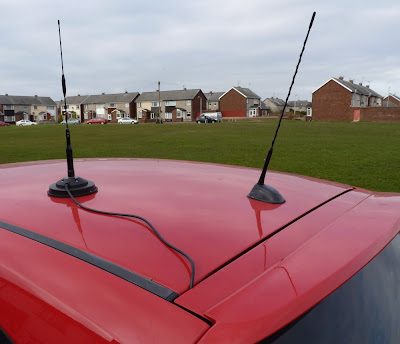 Last month I bought another compact 2m/70cm mobile antenna, the Moonraker MRQ525 which is slightly longer but still less than 1/4 wave at 145 MHz. 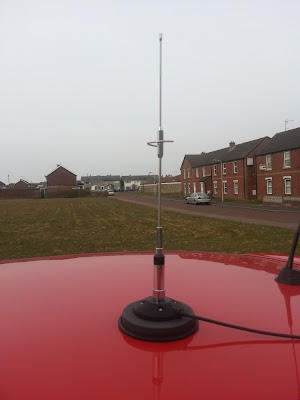 There isn't much of a difference between them in SWR readings, neither give a very good SWR when used on the same mag mount.
I compared them on receive along with a straight 145 MHz 1/4 wave whip, on the same mag mount.
In the 145 MHz amateur band, both were worse than the straight whip (they are shorter so expect them to be worse) by between 0 and 1 bar on the Yaesu FT-8900 meter.
At around 165 MHz, there was little or no difference between all 3 antennas, the 2 dual banders would be around 1/4 wavelength tall at this frequency. A straight whip cut for the exact frequency would be better but then it would not be a match for 145 MHz.
At around 455 MHz, the dual banders were very similar, but the straight 145 MHz 1/4 wave was down by around 3 signal bars (5 bars on the dual banders was 2 bars on the straight whip).
Without the centre phasing coil, the straight antenna acts as a 3/4 wavelength on UHF, with an uneven radiation pattern. That's fine if you have no interest in UHF at all.
There was nothing in the 430 - 440 MHz band to test it with at the time. The results would probably be around the same as on 455 MHz as they all seem quite wideband.
At 393 MHz, which none of them were designed to cover, the straight whip was still about 3 bars down and the Moonraker was slightly better than the others.
I also had a Watson W770 2m/70cm dual bander but this has developed a fault which made it worse than all 3 of the tested antennas.
A Watson W770 copy (by Sharmans) that I also have, is a bit worse than the 2 short dual banders around 165 MHz but better on 145 MHz.

Although the Nagoya is a 'cheap' brand, mine has had no faults after 3 years when it has been left on the car day and night, it is solidly built. I've had Moonraker antennas fail after a short time before, so it will be interesting to see what happens to this one. They are probably all built in the same factory in China anyway.
For everyday use where wideband reception is also important, these small dual banders are as good as anything else. Higher gain models will have smaller bandwidths.
Posted by M1AVV at 14:47 No comments: