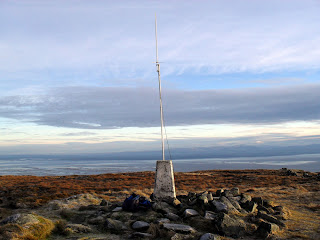 Went up Criffel today (SOTA GM/SS-130). Parked near New Abbey (at NX970634) where there is a free car park along a lane (not tarmac all the way along) from the main road, and it took about an hour to walk up, getting to the summit around 2pm like I said I would.
No funny business with 24 MHz etc. today, used 2 metres from the FT-817 into Watson W50 antenna. The trig point had the hole through the middle, not filled with concrete like a lot of them are, which is just perfect for setting antennas up. 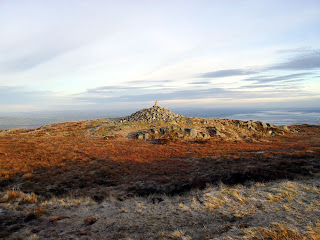 Made QSOs as far as Glasgow, Northern Ireland and Barrow, a summit to summit with GM4GUF on Tinto (SS-064) and my first ever 23cm contact with GM4WHA/M at Annan, a distance of 24 Km. We were both using the same radio, the Alinco DJ-G7, with the original rubber ducks (for 2m/70cm I've replaced the original with a Nagoya NA-771 which almost a full quarter wavelength at 2m). Signal was about S3 each way. That was also my first QSO using the new handheld. I wasn't really expecting any 23cm contacts (I wasn't 100% sure about using only 5 watts on 2 metres either, there never seems to be that much activity from Scottish hills, but that turned out OK). 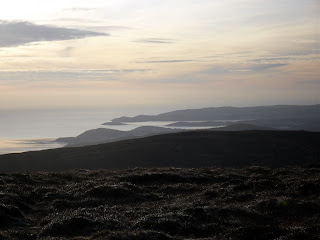 The views from the top were really good, I could see all the way down the west Cumbria coast to Black Combe and the Isle Of Man. If you want a Scottish summit with a good chance of working a lot of non-Scottish stations, Criffel is probably one of the best.
I'm typing this on a Samsung N130 netbook which I'm borrowing at the moment. My own laptop could almost be called a netbook, having an 11.1" screen, but it has a dual core processor and 1366*768 so would be more of a proper laptop in performance. This Samsung doesn't seem slow though. But then it's running Windows XP, which can run on just about any PC made in the last 10 years.
Tomorrow I think I'll have a go at one of the nearby smaller hills. I've got an 18ah battery with me and can use my FT8900 that I've got in the car, to give 50 watts on 2m. Later I'll go and have a look for something to eat, something that isn't from the Little Chef next door. The food is OK but £7.25 for breakfast? I don't think so.
Posted by M1AVV at 16:57