SOTA activation of Hailstorm Hill SP-009 today. I'd put on Sotawatch that I was going to be up there at 12:00 on 12 metres but I slept in so got to the summit about 2pm. Used the 24 MHz half wave which I'd used on Easington Fell in October.
This is made from about 4.5m of wire taped to a 5m fishing pole, fed through a "long wire balun" which I'd bought at a rally. On its own, that is resonant at about 33 MHz, with the "balun" transforming the high impedance of the half wa 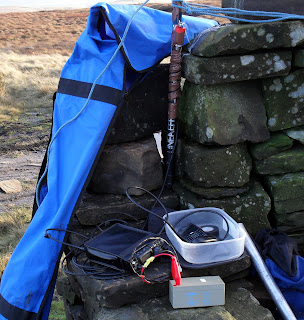 ve down to 50 ohms.
To pull the resonant frequency down without changing the length of the wire, I connected another length of wire (about 1 metre long) to the feed end of the 4.5m wire, and coiled that round the base of the fishing pole, so it goes round the "balun" and some of the coax. For 29 MHz, about 50cm of wire is needed instead. I could have used a normal coil at the feed point but this got the SWR down low enough and the antenna seems to work OK.

I made 3 QSOs on 24 MHz, to G0VOF in Blackburn, G0RXA in Stockport and G0SLR in Warrington. 12 metres isn't the most popular band in the world, which is one reason I've started using it, so 3 QSOs isn't too bad. I would have preferred 4 though, to make it a 'proper' 12 metre activation. After the 12 metre contacts dried up, I went on 18 MHz, as the SWR wasn't too bad on there (I'll try anything on the FT817 if the SWR meter shows 3 bars or less, about 3:1 - it was 3 bars on 18 MHz today, it was on 7 MHz too!).
I was hearing stations from the USA at S9 on 18 MHz, as well as some of the UK stations working them. I spoke to G0VOF again on this band, with not quite as good a signal as on 12 metres, but both our antennas were designed for higher frequencies. There were no other QSOs on 18 MHz. On both 18 and 24 MHz, there was some noise, above the level that you would normally get on a hill top. This was probably from the wind turbines, of which one was about 50 metres from me. 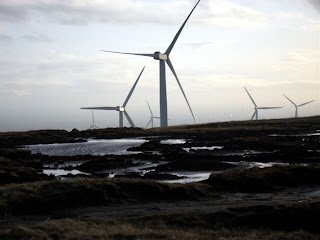 To get the 4th QSO I gave up with HF and tried 2 metres using my new Wouxun dualbandheld. There wasn't exactly a pile-up on there either, with M0LMP/P replying from somewhere near Pendle Hill. Today was the first day I'd used the Wouxun on transmit. It has a 2 tone 'roger bleep' which can be turned off. People say there is no need to use a bleep on FM and it might seem a bit "CB-ish" to some but there have been times when someone has been unsure if I've stopped transmitting on FM because I've not said my callsign, back to you etc. at the end of a transmission so maybe there is a use for a roger bleep because if the signal is good and the other person has their squelch up, it's possible they may miss the end of transmission. With CTCSS or digital voice, this is even more of a problem.

I walked up Hailstorm Hill from the north side, unlike last time I did it when I parked on the road between Edenfield and Rochdale. This time I parked in the village of Boarsgreave, which is about a mile up the hill from Waterfoot in Rossendale. I parked at the point where the road becomes a track, opposite an old factory (SD841206). From there the track continues up onto the moor, near a couple of mobile phone masts and another mast which has Airwave and a load of VHF Hi-Band sized folded dipoles. 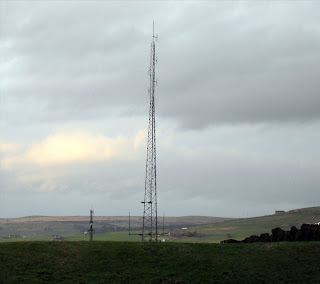 On the way there I got stuck in traffic on the A56 between the M65 and Haslingden. There was about a mile long tailback from a roundabout. Why was there a tailback? Because they had just put some cones and a roadworks sign in the nearside lane just before the roundabout. Because people were pulling out into the other lane and others were letting them change lanes, the traffic almost completely stopped. There was no roadworks, it hadn't started. The roadworks was going to be after the roundabout anyway. It looked like there has already been a crash because of this, with 2 cars at the side of the road, and an ambulance with them. Is it worth smashing 2 cars to put up a roadworks sign?
Posted by M1AVV at 19:45